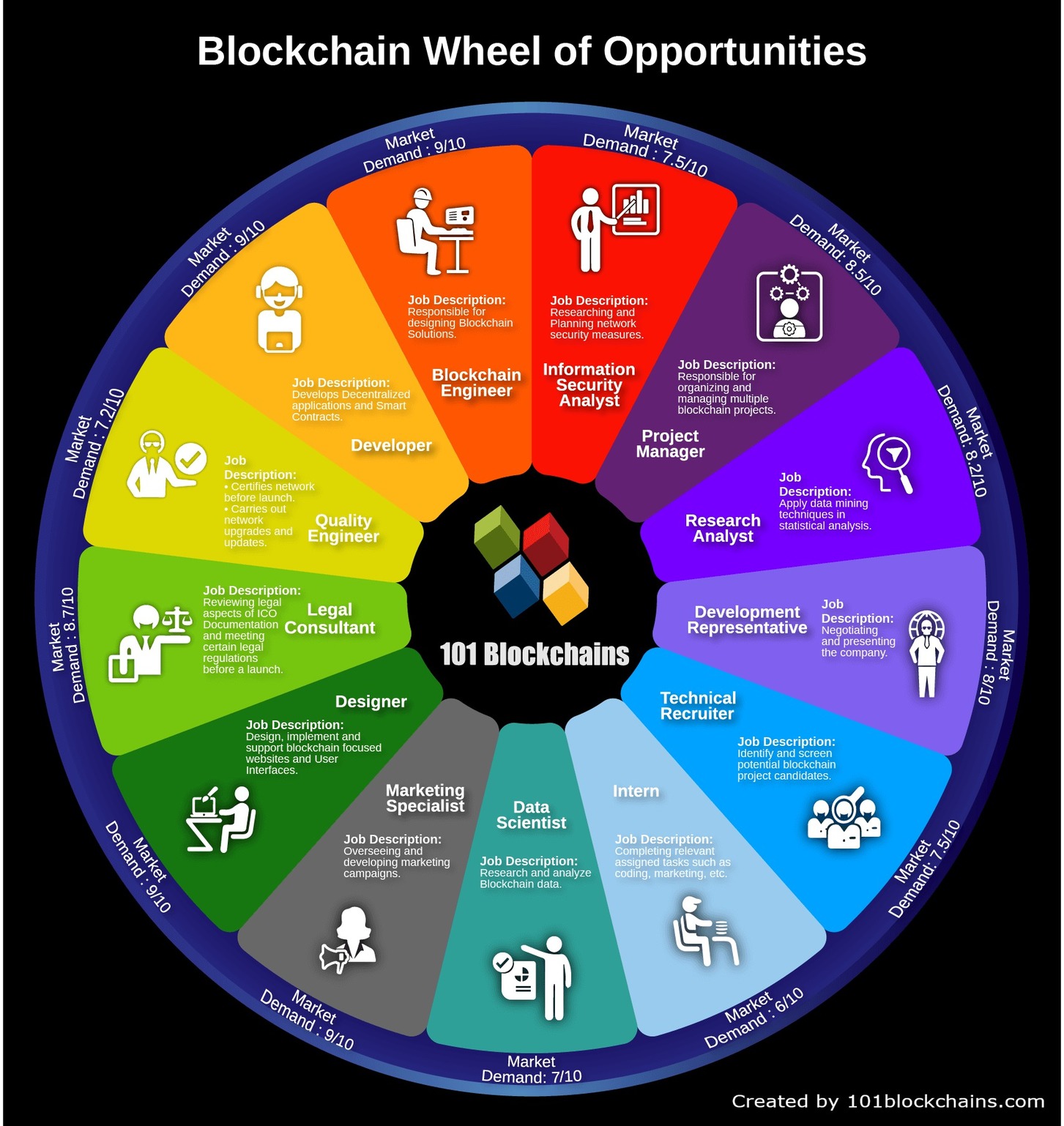 As recently as March 2010, the value of Bitcoin was even less than a penny. Fast forward ten years, the value of Bitcoin in 2020 rose to $20,000, and people who invested early were riding around in luxury cars. The craze surrounding Bitcoin will always have an intrinsic relationship with its price; universality drove the Blockchain job market into the spotlight.

Between 2017 and 2020, the demand for Blockchain rose by nearly 2000 percent, and it became one of the most highly-valued skills to have in the industry. By 2024, the net worth of the Blockchain market is expected to be around $20 billion. Today, 69% of banks are adopting Blockchain technology to add extra layers of security and to make their services hassle-free.

According to data collected from LinkedIn, Blockchain occupies the top spot in the list of skills that have high demand in 2020. The website created this ranking by considering those skills that are high demand in regard to the supply. The skillset of individuals who are getting hired most often is a clear proof of Blockchain’s growing demand.

The high ranking of Blockchain jobs is a clear indication of how much it has penetrated the world of business. Just a year before, Blockchain did not feature on the list of most in-demand skills. Blockchain is the most in-demand skill currently in Australia, Germany, France, and the United Kingdom. It is beating other popular technologies like artificial intelligence and cloud computing.

Blockchain was once hidden in the shadowy depths of the cryptocurrency realm. But it has now emerged as a viable business solution for several problems. Thus, recruiters don’t need to be with financial services to seek out new recruits for Blockchain jobs.

With the refocus on bringing products to market and profitability, the number of Blockchain sales, marketing, and design roles have increased. Cryptocurrency exchanges are the major employers in this sector. About 42% of employees in the Blockchain industry work for these exchanges, while 10% work for mining and hardware manufacturers.

All the big names in the corporate world like American Express, Amazon, Microsoft, JP Morgan Chase, Oracle, and IBM have adopted Blockchain as a line of business. The Blockchain job market now ranges across several industries, from healthcare to shipping, from gaming and entertainment to food safety and farming.

Many organizations are using Blockchain now to solve complicated issues, and this is also creating a big boom in the Blockchain job market. There is enough data that serves as evidence for the growing demand and high salaries for Blockchain programmers. In 2019, the number of jobs related to Blockchain rose by 300 percent with respect to 2018.

San Jose, San Francisco, and New York saw the most number of openings. This rise in demand for jobs in the Blockchain domain has also led to a growth in Blockchain job salary. According to Hired, the online jobs site, the average salary for a Blockchain developer lies somewhere between $150,000 and $175,000. This is significantly higher compared to what an average software engineer earns.

The Blockchain job salary range for Blockchain developers is not at part with those working with another in-demand technology, Artificial Intelligence. Blockchain is a rich combination of programming concepts and technologies, like ledger economics and object-oriented programming, with a solid base of cryptography. This means that there is a great demand for requirement specialists and product managers in the industry.

Since the supply for Blockchain developers is quite low, the demand is also quite high, and this is the reason behind the growth of the Blockchain job market. While the benefits of Blockchain are still under scrutiny, everyone knows about the technology these days due to extensive media coverage.

Several established organizations have adopted Blockchain and even taken initiatives exclusively related to this technology. Microsoft is one such organization that did this with Azure and introduced a Blockchain platform within it. IBM also has a dedicated Blockchain division that is based on Hyperledger.