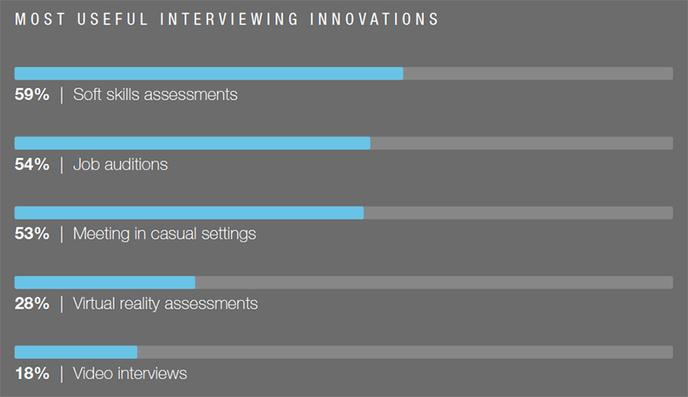 As this video shows, Mercedes wasn’t just holding interviews in the vehicle for fun, they were getting in on one of the latest hiring trends: interviewing candidates in a casual setting. This is just one of the trendy formats that’s emerging as a good supplement to traditional interviews (which are widely believed to fall short at assessing soft skills). Interviewing in a casual setting is becoming an appealing option because it allows candidates to let their guard down and enables the interviewer to observe their soft skills and personality in a new context. Recruiters at top companies across the globe are now taking their interviews into restaurants, coffee shops, cars, and even ferris wheels, all in an effort to assess interviewees a more authentic way. Here, we’ll take a closer look at how it’s done—and why you might want to try it out for yourself. Mercedes-Benz invites engineers into its vehicles for a more relaxed interview and an up-close look at the company’s work When Dieter is driving Molka around, their conversation seems relaxed and friendly (see video above). They crack a couple of jokes, but Molka also uses the opportunity to show off her technical know-how. When they encounter traffic, for example, she asks Dieter about the vehicle’s autonomous driving system, and he gets to explain some of its intricacies. Not only does Dieter witness an authentic side of Molka—revealing elements of her personality and soft skills that might have gone undetected in a more traditional setting—but she also gets a closer look at the exciting engineering challenges at Daimler. (Soon after the interview, she accepted a job offer.) “I think the idea that our future developers physically get in touch with our products from their very first few minutes at Mercedes really makes a lot of sense,” wrote Dieter. “After all, our products and technology remain the most convincing and fascinating arguments for starting a career at Mercedes.” Charles Schwab’s CEO throws candidates off at dinner to see how they react to the unexpected Soft skills are super important indicators of a candidate’s future success. But some of the most important skills—like managing difficult conversations, responding to setbacks, and resolving issues—are also the most difficult to test for in a traditional interview. Walt Bettinger, CEO of Charles Schwab, is known for inviting candidates to an informal dinner, then asking his staff to purposely mess up the candidate’s order. This unique approach serves double duty—eliminating some of the typical awkwardness associated with interviews, while giving Walt a chance to see how candidates react to the unexpected. For Walt, this one simple test reveals more about a candidate’s grit and personality than an office interview ever could. “We’re all going to make mistakes,” says Walt. “The question is how are we going to recover when we make them, and are we going to be respectful to others when they make them?” Havas takes candidates on a Ferris wheel to get them to let down their guard, while showing off the company’s fun culture Casual interviews typically take place in a local cafe or lunch spot, but as the team at Havas realized, a more adventurous approach can really pay off, improving on the traditional interview while also highlighting company culture. The ad agency’s top executives took over the Navy Pier Ferris wheel in Chicago for a two-hour window, interviewing 30 applicants on the iconic attraction. They limited each interview to two rotations of the wheel—exactly 15 minutes—with a couple of awesome, outside-the-box advantages. Not only were the interviewers able to see how the candidates’ personalities and skills shone through in an unconventional setting, but the event also showcased the Chicago-based agency’s commitment to reinvigorating brands, since the wheel itself was about to get a major refresh.