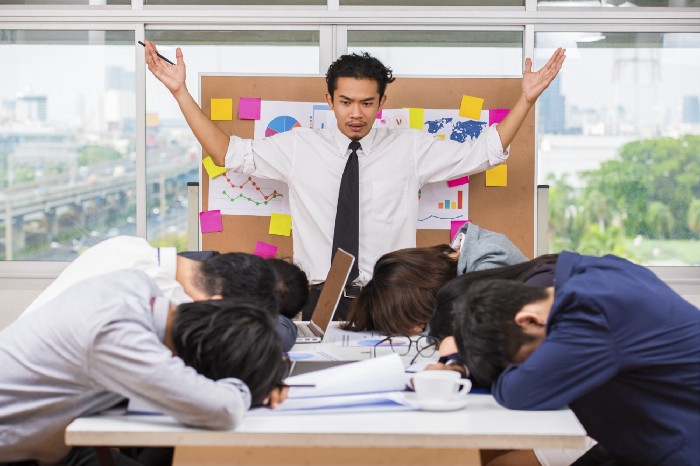 Poor leadership by an immediate supervisor is the reason why 75% of people leave their job, according to this Gallup Poll, ranking bad bosses as the #1 reason employees quit.

Why is there so much lousy leadership out there? Two reasons… at least.

First, many bosses aren’t trained to lead. A study by CareerBuilder.com showed that 58% of managers did not receive any management training.

Secondly, most leaders think they are better than they actually are. In a McKinsey & Company study of 52,000+ leaders and employees, the majority of bosses rated themselves far better than their employees did.

I’ve studied and practiced leadership for 25 years in the military, corporate, volunteer, and government settings. I’ve seen countless bad leaders across every sector.

Here are five things that could make someone a bad leader and how to avoid being one.

1. They lack the humility to seek help

Humility enables the vulnerability required for a mind to learn.

An arrogant mind is slow to adapt, while a humble mind is dynamic.

Asking for help or advice from subordinates or peers is a sign of mature leadership. Not asking is a sign of an insecure leader. Being vulnerable shows a leader trusts their team and is humble enough to learn and adapt.

Humility builds a team dynamic instead of a commander/subordinate dynamic.

How to avoid this mistake

Don’t be too proud, immature, or insecure to ask for help from anyone. Asking for help is a sign of strength and competence, not weak incompetence, even if it feels that way sometimes.

You don’t know everything. Don’t pretend you do.

2. They don’t delegate and trust others

A good leader gets out of their people’s way. Leaders quickly become toxic to their team and the company’s mission when they micromanage. Micromanagement prompts groups to do one of two things: lose all motivation and initiative, and wait for direction, or get frustrated over the boss not trusting them. This is how units become jaded and disengaged.

If the leader fails, the team fails.

Letting go was one of the hardest things for me to do as a new leader because I had the “if you want it done right, do it yourself” attitude. This mindset works in many aspects of life, but not when you lead a team.

That doesn’t mean you shouldn’t get your hands dirty — do get them dirty, and then let the team lead you by staying out of their way.

A good leader removes obstacles, including themselves.

How to avoid this mistake:

Tell people what to do, not how to do it. Then trust them by getting out of their way. They’ll surprise you with their initiative and ingenuity.

Those not in charge can get away with saying things that aren’t necessarily gospel. But many times, new managers are loose-lipped about raises, possible layoffs, the direction of the company and its mission, speculation on bonuses, etc. Some dangle possibilities of rewards to get teams to hit goals, then don’t deliver the carrot.

How you can avoid this mistake

Don’t promise what you won’t deliver. Don’t even suggest you’ll do something if you aren’t sure you will because even a suggestion is perceived as a promise.

Only say what you’d be willing to write in blood. Saying you don’t know is a much better answer than speculating.

Read the full article at: medium.com